Noel at St. Joes was beautiful. I loved the flow of the day. Lots of together time and plenty of alone time also. The slang term for relaxing, similar to our “kick back” is “pose” – I wonder if this comes from “repose.” Throughout the day people would check in with each other by asking “Ou pose?”

The service was run almost exclusively by the boys. They took turns reading, giving short(ish) sermons, leading songs, and singing solos. I love how they would clap for each other after each one completed their portion. After the service we moved down to the kitchen for cookies and milk with a Haitian twist. The “milk” was actually sweetened condensed and spiked with the local moonshine – clairin. Given this was the one night during the year that the boys do not have a curf

ew, I wondered if the spiking would make them more sleepy than excited to go out…

Rony came by and we walked to a club called Extrem. The name was a tad misleading! There were several couples there, dancing to Kompa music – Rony and I joined them but by 12:30, it wasn’t extreme enough to keep me away so we headed back to St. Joe’s via Rony’s house. I was really honored when he asked if I wanted to see his little room in the “Bario.”

The journey there was the most fascinating part for me. We walked down many sketchy cement steps, around several tight corners, and through really narrow alleys before arriving at his place. There is absolutely no way I could ever find it again. Once there, it was exactly how he described it – a single room, about 10x10 with a small mattress on the floor, his clothes stacked neatly against a wall, and a couple of 5 gallon buckets where he keeps his small propane stove and his

I’m really hoping I can figure out how to raise money for him to come back to Atlanta next year so that he does not have to pay for his own plane ticket next time. He gave so much to Galloway while he was there! I’d

love to be able to give back to him and also see how I can help him long term to find a way to study in the States!

We returned to Wings about 4:30 – I love being back, connecting again with the kids, teasing them, feeding them, holding them. Simply loving them and feeling their love. It won’t come as any surprise that I have my favorites here. What does surprise me is that I keep adding more (if everyone eventually becomes a favorite – what does that mean? Chuck might have a word for this because my vocabulary is failing me!). After dinner the boys go back up to the TV room which is in front of their rooms. They hang out there until bedtime. I usually stay there too until it’s time for our dinner, chatting with them, sharing my ipod, etc. Sometimes, like last night, I’ll take one of them out to the balcony (where it’s much quieter), to play one-on-one. 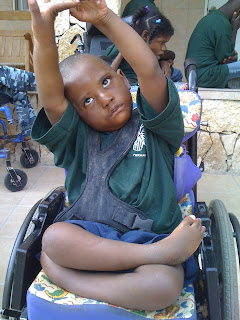 I had not spent much time on this trip with Alenson (a.k.a pretzel-boy, yoga-boy, or the nick name his mother - who still comes to visit him sometimes gave him – TiBooboo) . He’s the most flexible human being I’ve ever seen. I don’t remember exactly how old he is. He stays in his wheel chair most of the time but can pull himself around, and up, with lightening speed when not strapped in (hence the need for the straps). He is not vocal and his eyes rarely work together which can make him really fun to watch and play with. When we went out on the balcony last night, I thought it he would scoot and climb, and I would follow closely behind insuring his safety. Instead,

after we both sat on the floor, he crawled into my lap, turned around, leaned back, and fell asleep. Wow – talk about comforting and love inducing! I leaded back against the wall and let my conscious drift too – 45 minutes I will always treasure.

I think he really liked it too…after I gave him a quick hug before breakfast this morning, I walked about 5 steps away before I heard a distressed cry behind me. I turned to see that he’d flung himself from his chair towards me and was dangling about an inch from the floor by the one remaining strap that held against his onslaught. Whew! We cuddled some more before I placed him back in his chair with his straps tightened. We’ve cuddled several more times throughout the day – yum! 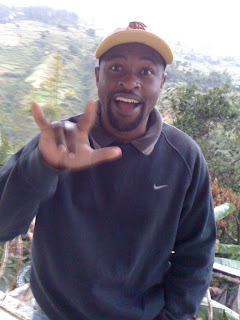 Alcindor and I walked towards Ft. Jacque this evening, but only made it as far as the soccer fields before we had to turn around to get me back in time for dinner. He is such an incredible man. I so admire how giving he is, how everyone who enters his kitchen is greeted with a smile and how most people leave with one of their own too. His friendship last summer and on this trip has been invaluable to me.

Last night he invited me to join him and many of his friends in dominoes on the patio to the entrance to Wings. Didn’t take me long to see that watching them play would be a lot more fun than trying to keep up with them in the game itself! They are cut throat, in that beautiful, loving, teasing, Haitian way. The loser of each round (which lasts until someone wins 5 hands in a row) is called a dog, made to stand, not allowed to drink his beer, expected to place the other players’ domino in the correct location once they set it down, and has to hold a tree branch in their mouth for all of the next round. If they lose another round, another branch is added. It sounds horrid but everybody is laughing hysterically the whole time, giving as good as they get!

Posted by mooncrossing at 8:02 PM